Can a fibroid be too large to be removed? 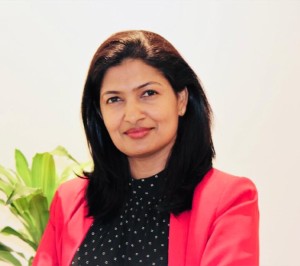 Uterine fibroids are benign growths in the uterus which can be of variable size from the size of a pea to the size of a melon. The largest fibroids have long been considered as challenges for the surgeon to remove. Open surgery for these large masses has the risk of bleeding, and the large size makes the laparoscopic "keyhole" approach technically more difficult.

I remember a 36-year-old female, married with no children. She had been diagnosed with a large fibroid of 23cm x 12cm size two years before she came to visit me, while she was evaluated for abdominal discomfort. She consulted many gynecologists and most of them advised her to go for the removal of the entire uterus by Laparotomy (large incision). This is because the surgery to remove the large fibroid from the uterus has a high risk of uncontrolled bleeding, and ultimately may require a hysterectomy, the removal of the entire uterus.

As the women did not have a child, she was understandably anxious to conserve her uterus. As she did not get any reassuring surgical option, she decided to go for traditional Ayurvedic treatment hoping that it might reduce the size of the fibroid and make it disappear. Unfortunately, Ayurveda and naturopathy treatment for 2 years did not give the hoped-for results; rather, there was an increase of 3 cm in size making the mass 26 x 15 cm.


She visited us after 2 years of ayurvedic treatment, and on clinical examination I could see that the uterus was very much enlarged and was reaching upto the level of the ribs, almost the same size the uterus would have in late pregnancy. Her main complaints were abdominal heaviness and discomfort, and unlike most fibroid cases she had never had any menstrual irregularities. After doing a proper evaluation with MRI and blood tests, we decided to go ahead with a Laparoscopic Myomectomy (fibroid removal). 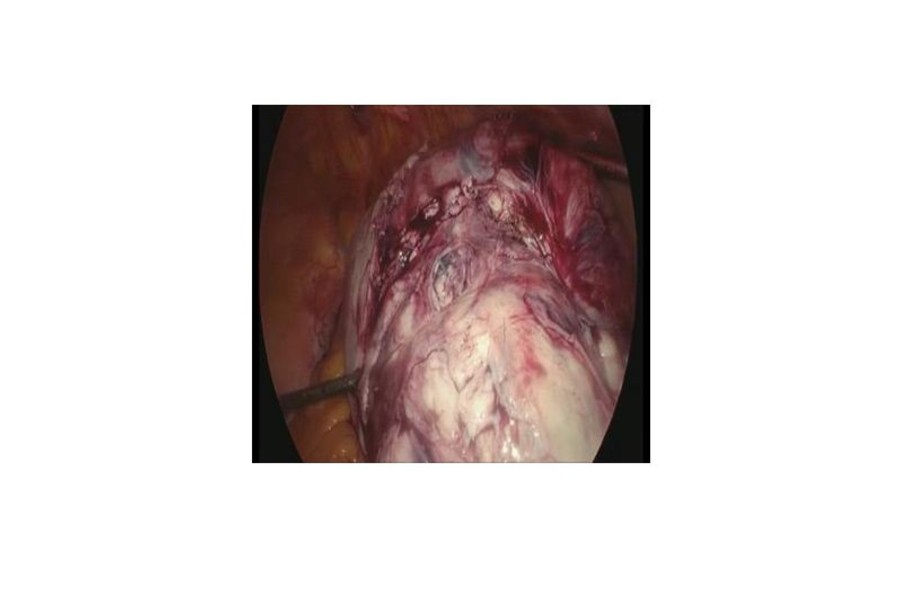 1)Image of Fibroid after enucleating from 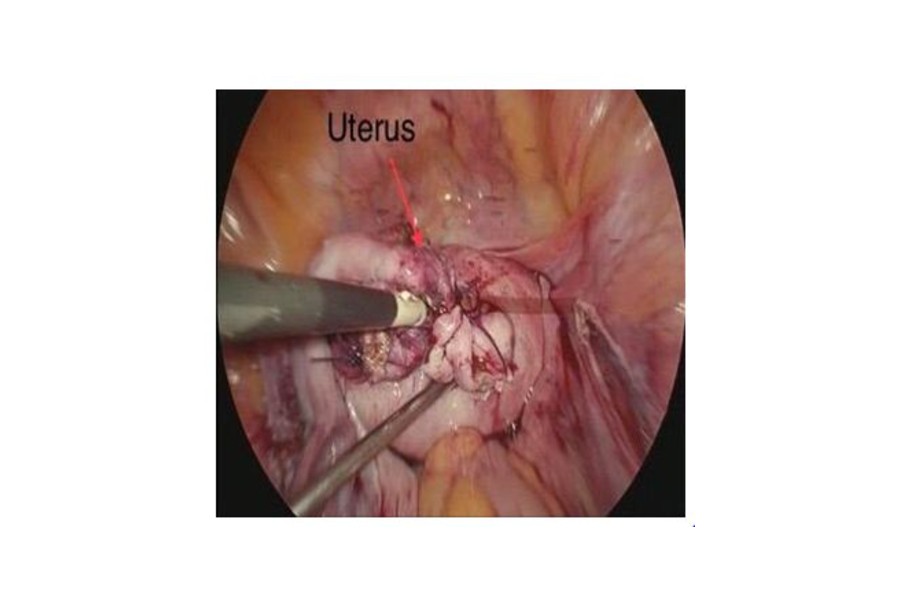 2) Uterus after removal of fibroid

We had taken all the precautions to reduce the bleeding during the surgery including laparoscopic clipping of the main blood vessels to the uterus. We had kept ready 3 units of blood, and also kept on standby the Cell Saver device, for transfusing back blood to the patient if large amounts were lost from the site of the operation. 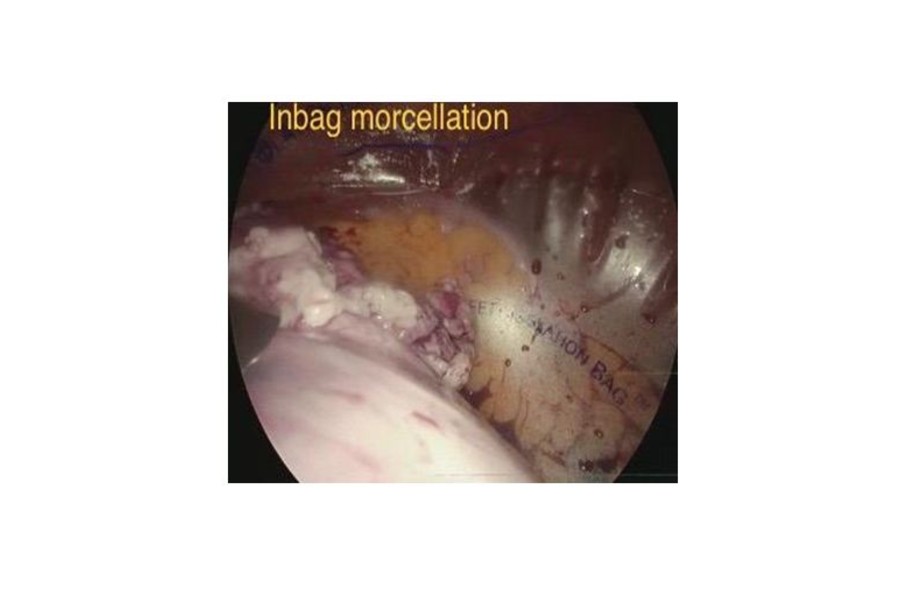 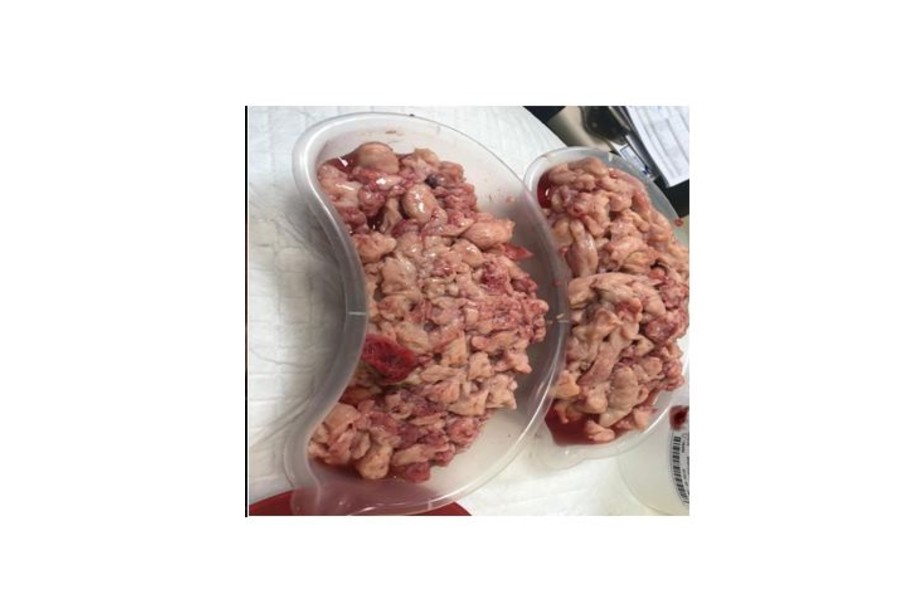 With God's Grace we were able to successfully remove the entire fibroid in a minimally invasive way. The operation needed 4 small openings in the abdomen of which 3 were 5mm long and one of 1.5cm; the last one being used to take out the large mass after cutting it into smaller pieces in a bag. Large fibroids can be very rarely cancerous although our patient did not have any risk factors for this. As an extra precaution to avoid any spread of such tissue the entire mass was kept in 5000ml bag and the masswas morcellated, or cut into smaller pieces, before removing the mass and the bag. Happily, for us, the blood loss for the entire procedure was less than 250ml. Our patient was discharged on the 2nd post-operative day, with her uterus preserved for future pregnancy, as she had hoped for.

Large and multiple fibroids are now a days not a contraindication for myomectomy or fibroid removal. This can be done in a minimally invasive way in the hands of an experienced laparoscopic surgeon. A fibroid specialist who is regularly handling such cases will definitely be able to help.

Check out other blogs